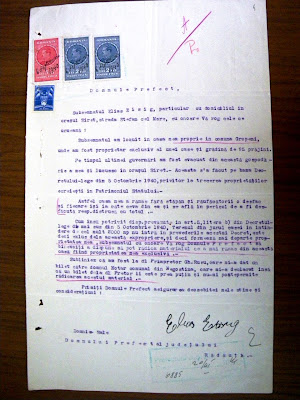 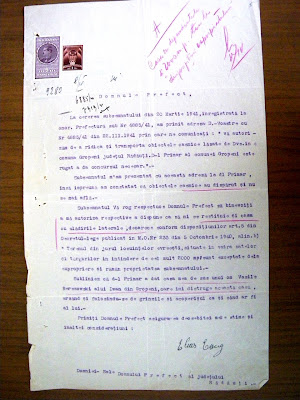 The undersign Elias Eisig, private person with residence in the city of Siret, Stefan cel Mare Street; I am honored to request the following:

The undersign I lived in my own house in Gropeni commune were I was the exclusive owner of a house and a garden of 95 prăjini (~18000 sqm). During the last government rule I was evacuated from this farmhouse of mine and currently I live in the city of Siret. This was made under The Decree-Law from 10/5/1940 regarding the Jewish properties transition to The State Ownership.
Therefore my house remains unattended and the villains take it apart and everybody take something of it and there is the risk to be completely taken apart, that is completely ruined.
But the article 5, type b) from the above Decree-Law from 10/5/1940 is stating that the land around the house, with a surface below 2000 sqm, is not subject of this decree, is therefore exempt from this expropriation and is still my property, the undersigned I am honored to please Mr. Prefect to deign to order to be allowed to take what things remains from this house as excusive property of mine.
I want to underline that I was to Mr. Primpretor (the government representative in the commune) Gh. Rusu, which gave me a note for the communal notary from Negostina, but this one argue that a note from Mr. Pretor is too little for him and he cannot allow me to take anything.

To the undersign request from 3/20/1941 under the prefecture registration no 6885/41, I received your response under no 6885/41 from 3/22/1941 by which you inform me: “you are authorized to remove and transport the house holds that you leaved in Gropeni commune, Radauti county. The mayor of Gropeni commune is asked to assist if necessary.”
The undersign present me, together with the mayor, to this address but together we establish that the household are missing and there are no more.
The undersign, with respect Mr. Prefect, I ask you to deign to order the restitution of my house and adjacent buildings because the art. 5 type b) from The Decree-Law published in The Official Collection of Law no 233 – 10/5/1940 is stating “The land around Jewish houses, situated inner villages or boroughs, below the surface of 2000 sqm are exempted from expropriation and remain the property of the undersigned.
I underline that Mr. Mayor gave my house to a man called Vasile Berezowski, son of Iwan from Gropeni, which is destroying my house, burning and using the beams and the roof as if he owns them. 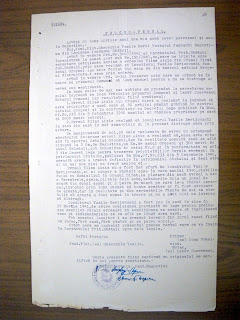 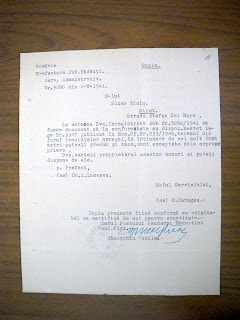 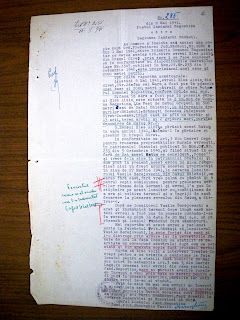 Today 26, month of April, one thousand nine hundred and forty one year, in Negostina.
We, gendarme warrant Gheorghiu Vasile, head of The Gendarme Office in Negostina, from Radauti Gendarme Legion.
Referring to the order 3007/1941 issued by the Radauti Prosecution Court register to our office under no150/1941, asking us to investigate the written appeal of the Jew Elias Eisig from the city of Siret, Radauti County, in which he is complaining about Vasile Berizovschi, inhabitant of the Gropeni village, Radauti County, for taking him out of his house situated in the heart of Gropeni village, by force, and then destroying it by fire.
Referring to Mr. Prosecutor ordering us that, in union with the commune mayor, to take actions that the above mentioned property not to be destroyed.
Based on the above mentioned, we proceed to investigate the case together with Ioan Frasiniuc, the commune mayor and Lazar Suceveanu, the commune notary and here are the results:
The Jew Elias Eisig from the city of Siret complain to The Prosecution Court that he is the owner of one house and 80 prăjini (~16000 sqm) garden land in the heart of Gropeni village and by The Decree-Law published in The Official Collection Of Laws no 233 from 10/5/1940 the above-named should remain owner of the house and of 2000 sqm. The Jew Elias Eisig complains that the inhabitant Vasile Berijovschi took him out of the house forcefully and currently is destroying the house by fire.We are mentioning that the Jew complains are not true because the Jew Elias Eisig complain that the house is situated in the heart of Gropeni village but in reality this house is situated 2 km from Negostina, 1 km from Gropeni village and 500 m from Balcauti village, under the name of ratus no.2 (?) and according to the article 3 from The Decree-Law For The Jewish Properties Transition To The State Ownership, published in The Official Collection Of Laws no 233 from 10/5/1940, this wealth is definitely shifted into the state property, therefore the Jew Elias Eisig is no longer entitled.
The Jew Elias Eisig was not forced out from his house by the inhabitant Vasile Berijovschi, but himself left the house in the summer of 1940, establishing his residency in the city of Siret. Leaving the house, the Jew dismantle the windows, the doors, the hotplates of the stoves, the planks from a mill behind the house and two mill stones and sold them himself, pretending in the month of August that all these were destroyed by the army, but in reality and according to our research we found that the army was just passing by and had no interest in destroying.
The inhabitant Vasile Berijovschi was given the house on March, 27 1941, by the legal comity for the Jewish rural wealth taking over, under the obligation of taking care of the house and of the annexes [independenţele – sic!] around this house.
The land around the house was rent out to the same inhabitant as he is a poor man, without house and having four children.
Therefore, we closed this report and we present it to The Radauti Prosecution Court for the legal procedure.

This copy is identical to the original; we are certifying the accuracy,
Head of the Gendarme Office
Gendarme Warrant Gheorghiu Vasile

To your request no 9280/1941 we inform you that according to The Decree-Law no 3347 published in The Official Collection Of Laws no 233/1940, the land surrounding Jewish houses in surface under 2000 sqm, as well as the house itself, are exempted from expropriation.
You are the rightful owner of these goods and you can dispose of them.

For the Prefect,
Dr. A. Lucescu
Head of the Office
E. Caragea

This copy is identical to the original; we are certifying the accuracy,
Head of the Negostina Gendarme Office
Gendarme Warrant Gheorghiu Vasile

I am honored to send you a copy of The Radauti County Prefecture order no 9280 – 5/1/1941 for the Negostina Commune Hall and a copy of the same order for the Jew Eles Aizic from Siret, informing him that, by The Decree-Law no. 3347 published in The Official Collection Of Laws no. 233 – 10/5/1940, he is the rightful owner of a house and 2000sqm.
In the same time we want to report the following:
Today, 5/8/1941, according to the above order, the Negostina commune notary appropriate to the Jew Eles Aizic from Siret, Stefan cel Mare Street, a house and 2000 sqm.
The house in question is situated 2 km south of Negostina commune, 1 km west of Gropeni village and 500 m east of Balcauti village at the crossroad Balcauti/Gramesti/County Road Siret-Suceava. Near the house there is 1 hectar (~100sqm) farming land and 13 arii (working space for machines) and two large stables, under the name of Ratus nr. 2.
The Jew Eles Aizic left this Ratus in the summer of 1940, leaving it unattended and leaving for the city of Siret.
According to the article 3 from The Decree-Law for the Jewish Properties Transition to the State Ownership, published in The Official Collection Of Laws no 233 from 10/5/1940 and as it is situated outside the village this Ratus is considered as manor and goes without saying in the state ownership and as until now this Jew did not reclaim this property, on March 27 1941, at the inhabitant Vasile Berejovschi from Balcauti village request, a poor man, without house, without a strip of land, and 4 (four) children, the comity for the German and Jewish wealth taking over, appropriate this inhabitant under the obligation to plough the land and take care of the house because the Jew destroy it when he left.
After the inhabitant Vasile Berejovschi plough and seed the land near the house, today, the Jew took possession of it warning him to leave until may 20 c.y. leaving him without the harvest.
We are also reporting that this Jew made a written complain to the Radauti Prosecution Court against the inhabitant Vasile Berejovschi that this one took him out of the house forcefully and destroy it by fire but our local researches indicate that none of this is true as stated in the attached copy of the report.
We are asking you to deign to intervene to the authorities in charge to send a comity to establish if the goods above mentioned are in the category of article 3 or 5 from The Decree-Law. Currently, all the Jews living in the area of Negostina Gendarmerie Office, who left their rural fortunes, begin to return to the villages reclaiming repossession, even if one of them already sell it.
In addition to the above the Jews began to swarm the villages and to spread alarming ideas among rural population because they are the enemies of the Romanian homeland, proved at the surrender of Bessarabia and Northern Bucovina.