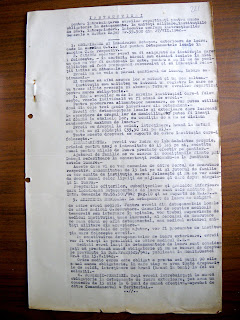 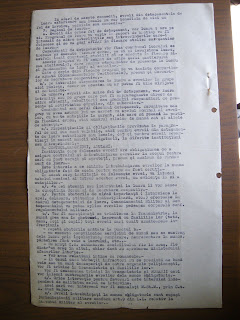 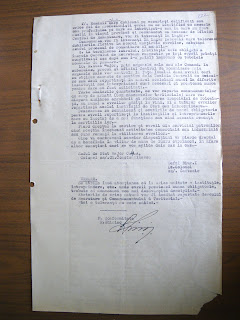 For the usage of Jews assigned for forced labor in squads, at the military units, state institutions, in factories, as written under the General Directions of the General Headquarter no. 55.500/VII.1942

The chief of the C.4.A. Headquarter
Colonel Gh. Constantinescu

ADDENDUM
It is again emphasizing that in any unit – institution, factory, etc., where Jews are assigned for forced labor, a perfect discipline must rule.
Any unruly facts shall be immediately reported to The Recruitment Center and to The 4th Territorial Headquarter.
No tolerance is admitted. 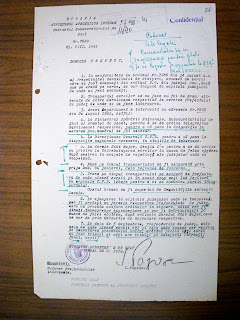 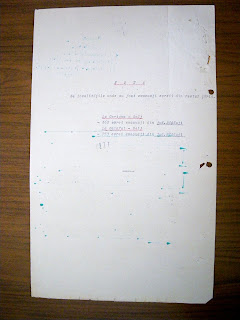 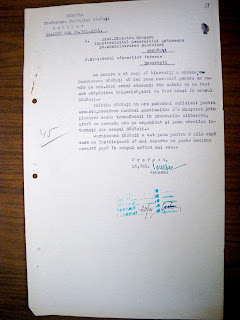 1. According the order no. 7886 – 8/14/1941 issued by The Presidency of the Minister’s Board, it was decided that all Jews that have been evacuated according to the order Gendarmerie headquarter from your county, as shown on reverse, will return in the county capital from where they have been evacuated.
2. The Jews transportation will be accompanied by passing bills issued by the respective Garrisons at the request of the prefect from the county where embarking took place.
3. Our department intervene with the addresses no. 7689 – 8/20/1941 as follows:
a. To The Defense Ministry, to The Deputy State Secretary for Land Forces, to issue telegraphic orders to the designated garrison for the releases of the necessary numbers of passing bills.
b. To The General Office of the National Railways Company to provide the necessary wagons in the embarking railways stations.
c. To The General Headquarter, section I, to issue the necessary orders for the Jews usage for community labors after their arrival in the counties residence cities.
4. The transportation guarding will be provided by you, with gendarmes from The Gendarme’s Legion.
5. The food for the transportation will be provided by The Prefectures from where the Jews are leaving and for this you will contact local officials of The National Railways Company to find the transportation duration. The local Jewish communities will cover the costs for the food.
6. At their return at the designated county capital they will be hand over with paper forms to the county prefect who will proceed according to the in force orders, that is they will be closely surveyed and they will be used for community labors following The General Headquarters orders released through the local Recruitment Centers.
7. On September the 5th the county Prefectures from the departing point as well as those from the arrival end will report about the achievement of the present order showing precisely how many Jews were sended, by the categories (men, women, children).

With honor I ask you to deign to order The Radauti Garrison to release the necessary personnel for the surveillance of a number of around 1000 Jews evacuated from the surrounding villages under Bolsheviks occupation and brought to Radauti.
The Radauti Police have insufficient personal for this job because the numbers of gendarmes has diminished being transferred to the liberated counties, besides this, we need to organize also the surveillance for the Jews confined in Radauti.
The Radauti Garrison gave personnel for surveillance for only two days letting us know that they cannot maintain this job for the above purpose. 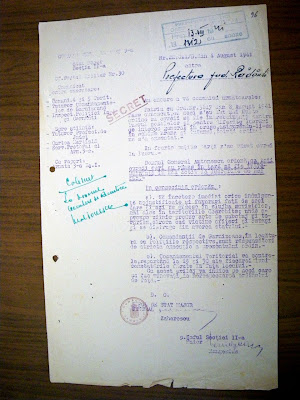 To The Radauti County Prefecture - SECRET

We have the honor to communicate the followings:

The homeland, with the order no. 5617 – 8/281941, inform that, although many orders were released about the Jews usage for roads reparation and others various communities labors inside the cities, providing them in exchange with food and tobacco, still this order was not executed.
Very few Jews have been seen working.
General Antonescu order that all Jews remain in the country to be actively used for the above mentioned labors.
Therefore we order:
a) Any unmotivated leniency or favors towards those who, to these days, are serving the soviets mainly in the liberated territories, must end immediately; there, on a daily basis, they are producing sabotages and terrorism with victims among officers and soldiers and destroying the state belongings.
b) The garrisons commanders, together with the police, are responsible for the strictly obedience of this order.
c) The county commander will control, reporting on 15 and on 30 of each month their observations made locally. On that occasion he will indicate those responsible for not obeying the present order.