Repatriates at the USSR/Romanian Border - March/April 1946

10,673 repatriates, mainly Jews from Northern Bukovina, crossed the USSR/Romanian border at Siret in March/April 1946, i. e. those Jews who survived Transnistria and the Holocaust.

By cortesy of Dr. Marian Olaru, Director of the Eudoxiu Hurmuzachi National College and Bukovina Institute, both located in Rădăuți/Romania. 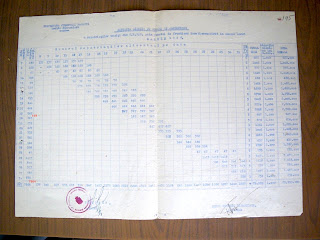 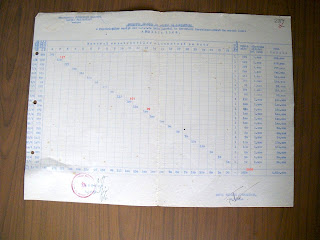 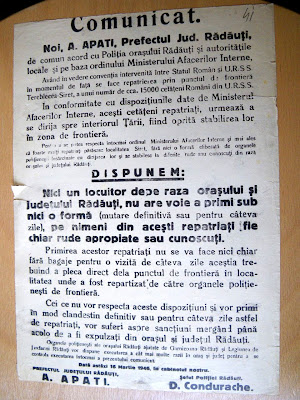 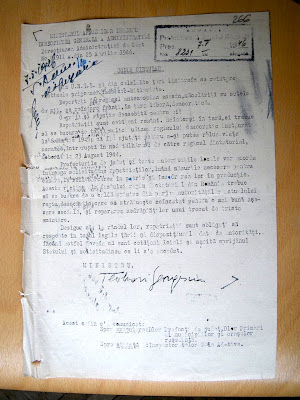 We, A. Apati, Radauti County prefect, in joint agreement with Radauti Police and the local authorities and according to The Home Office order,
According to the agreement between The Romanian State and The U.S.S.R., currently a number of 15.000 Romanian citizens are being repatriated from The U.S.S.R. through the custom check point Tereblecea-Siret.
In keeping with The Home Office dispositions, those repatriated citizens are to be directed to the main land, their settlement in the border area being forbidden.
In order to strictly obey The Home Office order, particularly because many of those repatriated are leaving Siret city without any passing released by the police authorities in charge with their orientation and settle at relatives or friends in the Siret area and Radauti County,
We are decided:
No inhabitant from the city area or from Radauti County, under no circumstances, is allowed to receive (for definitive move or only for a few days visit) any of those repatriates, even closely relatives or acquaintances.
Receiving those repatriated is not allowed even without luggage for a few days visit those ones must leave the custom check point directly to the place town designated by the custom police offices.
Those not obeying this decisions and secretly receiving for definitive move or only for a few days visit those repatriates will suffer severe sanctions leading to their own expelling from Radauti City or County.
Radauti City Police Office with the help and support of the Radauti Garrison and Radauti Gendarme Legion will order as many raids as needed in the city and in the county in order to check the precise application of this decision.
Issued today March 16, 1946 in our office.
Radauti county prefect,
A. APATI

From The USSR and the other neighboring countries victims of fascist-hitlerist persecutions are coming home.
Deported by the murderer antonescian regime, butchered by the hundreds of thousands, they are returning broken, in a free democratic country.
Let’s pay a special care and attention for them!
Those repatriates are Romanian citizens. Returning back in the country, they should enjoy all the concern of the democratic regime set up on March the 6th 1945; to be supported to resume their normal life, scoundrely interrupted by the dictatorial regime overthrow on August 23rd 1944.
The county prefectures and all the local authorities will completely support those repatriates taking the necessary measures for their housing on their coming back and for taking up a job. Those victims of the late dictatorial regime in Romania must receive a worm welcoming from the authorities of the present democratic regime which constantly endeavor for a better social order and for the correction of the injustices of a sad memory past.
Of course, in turn, the repatriates are assuming the obligation to thoroughly respect the country laws and the authority’s decisions proving that they are loyal citizens deserving the state support and concern.

This order was sent:
To be put into practice: to the county prefects, to the cities mayors
For information: to the administrative inspection offices. 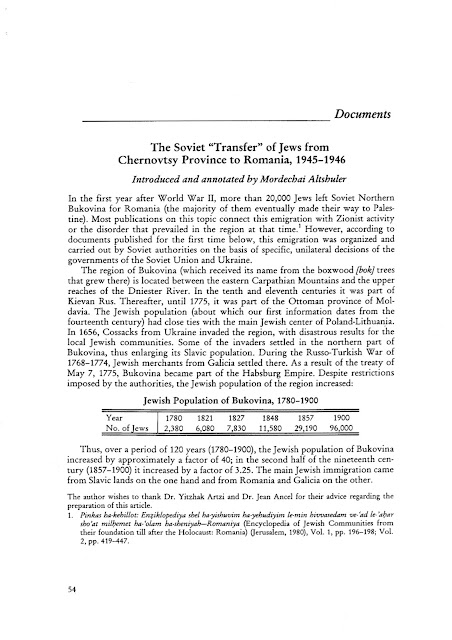 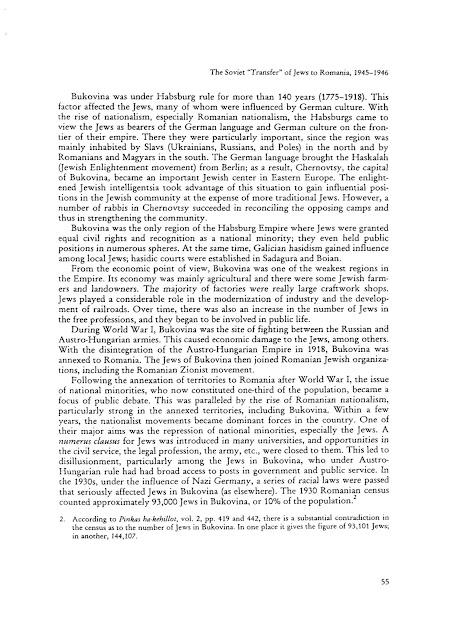